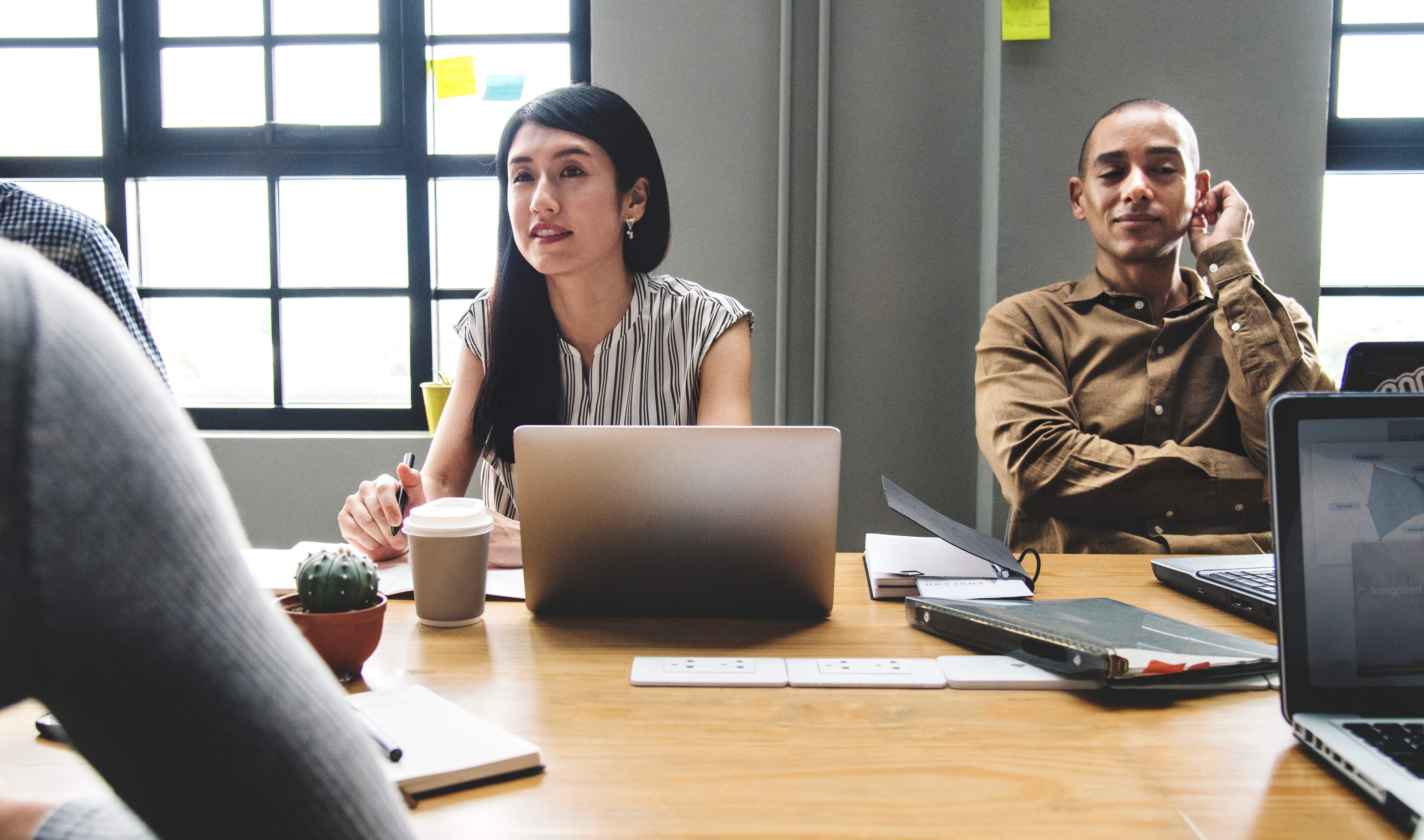 Raising Money to Scale Your Startup

The FG Fundraising Cohort is a 6-week virtual program designed for underrepresented founders who want to raise money to scale their startup. The entire cohort experience is 100% virtual, so founders can participate from anywhere in the world. Cohort Expert Trainers are announced as they are confirmed. For our next FG Fundraising Cohort, we have updated our curriculum to cover topics that train founders on how to develop a winner’s mentality, as well as educate them on the differences between angel investors and VC scouts, where to discover them, and how to pitch them successfully.

FG Fundraising Cohort 17 is Founder Gym’s first cohort specifically designed for Black women founders. If you do not identify as a Black woman, but are interested in participating in the next FG Fundraising Cohort that is open to all underrepresented founders (women, Black, Latinx, Indigenous, LGBTQIA, veteran, etc. founders), then please go here.

Designed Just for You

The FG Fundraising Cohort was specifically designed for founders who meet these qualifications:

What makes investors excited about some startups, but not others? Is it the product, the traction, the market, the team, the story, or something else entirely? In this live training, you will hear directly from a seasoned investor about what metrics really matter, so you can focus your energy, and stop wasting your efforts on things that don’t really matter.

Investors are interested in money. In order for you to get their attention, you must be able to talk about the monetary value of your company – not only as it stands today, but it’s potential to grow into the future. Being able to create financial projections that tell an attractive story about your company is key to getting an investor to say yes.

During this live training, you will hear from a founder who has experience raising money – and lots of it! They will walk you through step-by-step how they secured the bag, and highlight the mistakes they made along the way, so you can be sure to avoid them. They are a founder that is several steps ahead of you, and they will offer you a window into what’s possible for you once you raise money and scale your startup.

There are many sources of capital to scale your tech startup, and one of the best places to look is amongst angel investor groups and VC scout programs. As more tech founders and employees generate wealth, they are now becoming angel investors, and as more VC firms compete for the best deal flow, they are now starting scout programs. During this panel, you will hear from angels and scouts about best practices on finding, pitching, and closing them.

All businesses are legal entities, and when it comes to securing money from investors to grow your tech startup, it is vital that you have a great lawyer in your corner. This live training will cover the most essential legal matters that every tech startup founder should prioritize, in order to be eligible to accept funding from outside sources.

You only get one chance to make a great first impression and you don’t want to blow it. What you say and how you say it are incredibly important when it comes to fundraising. Whether it is an investor email or an in-person pitch, it is essential to learn the communication etiquette that investors prefer. Investors speak a certain language, and at Founder Gym, you will finally learn what it is.

Each week, you learned valuable information to increase your odds of raising money to scale your tech startup. Now, it is time to “walk the talk” and show everyone how much you have grown. For graduation, you will present your 2-minute pitch in front of your FG Fundraising Cohort Gymmates and get a chance to be voted “Best in Cohort.” It’s time to show up and show out. Let’s go!

For six consecutive weeks, you will receive live training from Founder Gym’s expert trainers. All live trainings will be facilitated by Paige Hendrix Buckner, Chief Operating Officer of Founder Gym. Paige has supported over 500 founders in their completion of Founder Gym’s rigorous training program and is on hand to ensure all founders are set up to both graduate from the FG Fundraising Cohort and succeed beyond its completion.

Trainers are updated as they are announced.

Arlan Hamilton is the Founder and Managing Partner of Backstage Capital, a venture capital firm dedicated to minimizing funding disparities in tech by investing in high-potential founders who are people of color, women, and/or LGBT. Started from scratch in 2015, Backstage has now raised more than $15 million and invested in more than 175 startup companies led by underestimated founders. In 2018, they launched a four-city accelerator program in Los Angeles, Detroit, Philadelphia, and London. Arlan has been featured on the cover of Fast Company magazine as the first Black woman non-celebrity to do so, and is the author of “It’s About Damn Time” and host of the weekly podcast “Your First Million”. Arlan and her mother, Mrs. Earline Butler-Sims, announced their scholarship program which kicked-off with scholarships for Black students at Oxford University and HBCU Dillard University.

Phaedra Ellis-Lamkins is one of the few African-American female founders to raise venture capital from some of the most notable firms in the industry, including Y Combinator, First Round Capital, Kapor Capital, and Roc Nation (cue Jay Z). To date, Phaedra has raised $23.1 million to scale her tech startup, Promise, which helps criminal justice agencies reduce recidivism, minimize costs, and promote public safety. Prior to co-founding Promise, Phaedra was Head of Care at Honor, another venture capital-backed startup that has raised $115 million in funding to scale their work to improved personalized home care for the elderly. She has been featured by Forbes, Nasdaq, TechCrunch, PR Newswire, Inc. Magazine, and more.

Nmachi Jidenma is Head of Scouts and Partnerships at Sequoia Capital, a top 3 venture capital firm in the world. In this role, she leads partnerships as well as Sequoia’s proprietary Scouts seed stage initiative where founders and influential affiliates invest in pre-seed and seed stage companies on Sequoia's behalf. Sequoia Scouts are the longest standing scout program in the industry and scout investments have been made in several successful companies, including Stripe, Uber, Thumbtack, and Guardant Health. Prior to Sequoia Capital, Nmachi led global strategy and business development at WhatsApp Inc, the world’s leader in mobile messaging with over 2 billion monthly users. She previously led global strategic partnerships at Facebook with financial services industry leaders such as PayPal, Visa, Mastercard, Adyen, and PayU (Naspers). Prior to Facebook, Nmachi drove Global Business Development at PayPal for its billion-dollar mobile disruptors portfolio where she launched the company into new verticals such as mobile marketplaces, transit, and cryptocurrencies through partnerships with innovative startups and companies.

No one has trained more underrepresented founders than Mandela. After becoming one of the first Black women to raise venture capital in 2012, and later becoming one of the first Black women to work at a venture capital firm, Mandela saw the disparities in funding up close. This is why she built Founder Gym -- to help more women, people of color, and other underrepresented groups in tech -- gain access to knowledge, network, and know-how to raise capital to scale their startups. Mandela is an inaugural member of First Round Capital's Angel Track program and an industry expert, who has shared her frameworks for success on over 150 stages (e.g. TEDx, SXSW, Startup Grind) and more than 100 publications (e.g. Forbes, Wired Magazine, Business Insider). Mandela has received various recognitions, including being named as Entrepreneur magazine’s 100 Most Powerful Women, Forbes 30 Under 30, and LinkedIn's Top 10 Voices in Venture Capital and Startups. 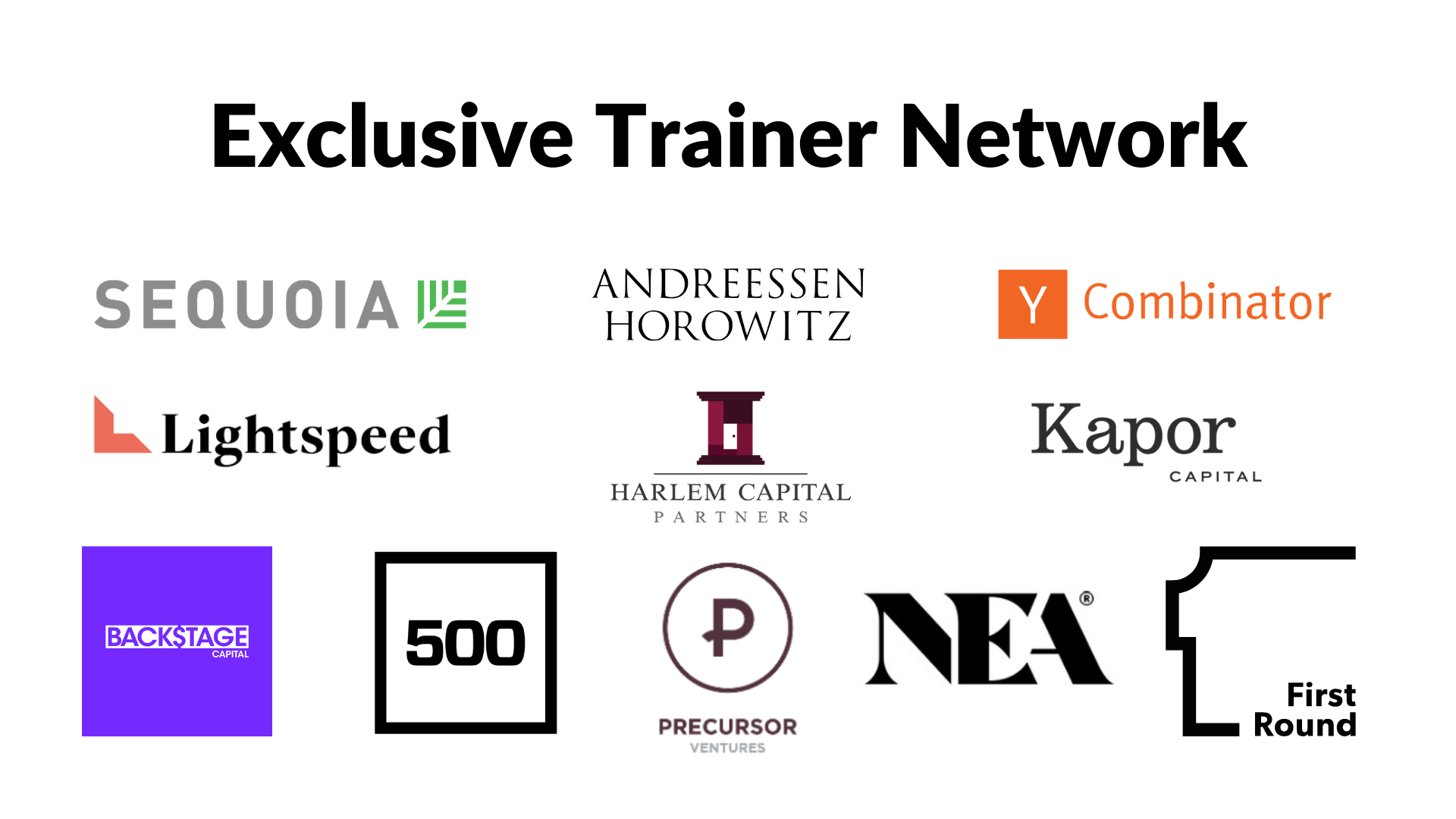 During the FG Fundraising Cohort, every founder must complete their fundraising toolkit in order to graduate. The toolkit includes the most essential materials needed to successfully raise startup capital. Once a founder becomes a FG Graduate, their fundraising toolkit is shared with Founder Gym’s exclusive network of accelerator directors, angel investors, venture capitalists, startup lawyers, funded-founders, and ecosystem partners in Silicon Valley and beyond.

Below is a list of the investor groups in the Founder Gym community:

Partner at First Round Capital

Topic: Inside the Mind of a VC

Topic: The Metrics That Matter

Founder & CEO of The Muse

Topic: Fundraising for Founders Based Outside the United States

Topic: The Math of Fundraising

If you already had everything you needed to succeed, you would not be here. The truth is, everyone needs help to get where they want to go, and Founder Gym is here to provide you with an inclusive community, rigorous accountability, and a clear roadmap that will get you the results you have been searching for. Founder Gym has custom-designed a virtual experience unlike anything out there, and our model continues to prove effective in accelerating founder success.

Being a founder is definitely hard. Being a founder can also be extremely lonely. The Founder Gym community consists of more than 516 founders living in 25 countries that span 6 continents! Once you join our ranks, you will never again have to navigate the entrepreneurial journey alone. Seeking feedback on a go-to-market strategy? Someone in our community can give you advice. Preparing for an upcoming investor meeting? Founders in our community love to help each other practice. Looking for great talent to join your team? Our graduates have amazing networks you can leverage. Our motto at Founder Gym is “We All Go Up Together,” because we know it’s going to take all of us working together in order to succeed.

What People Are Saying 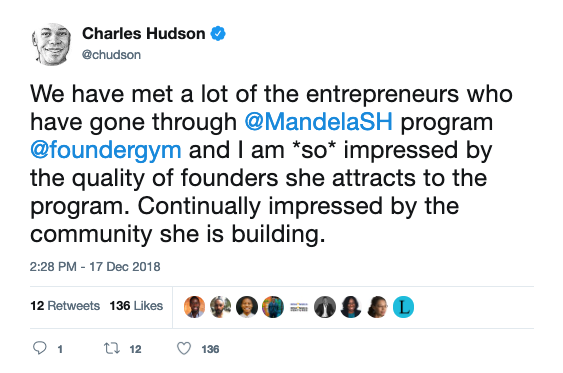 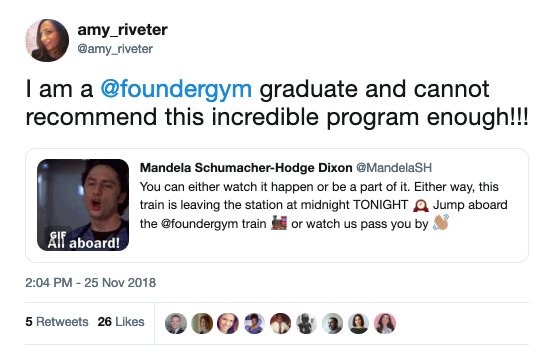 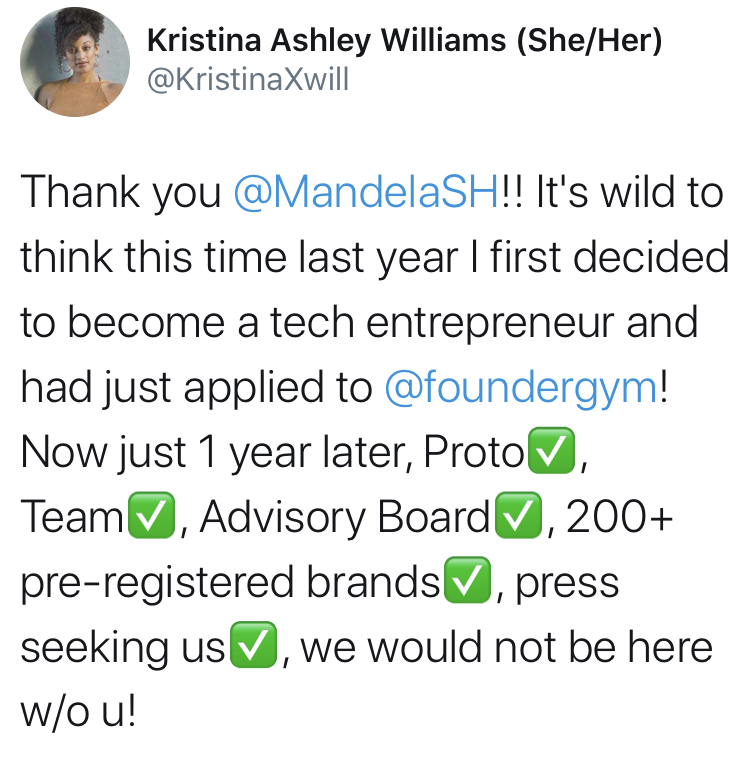 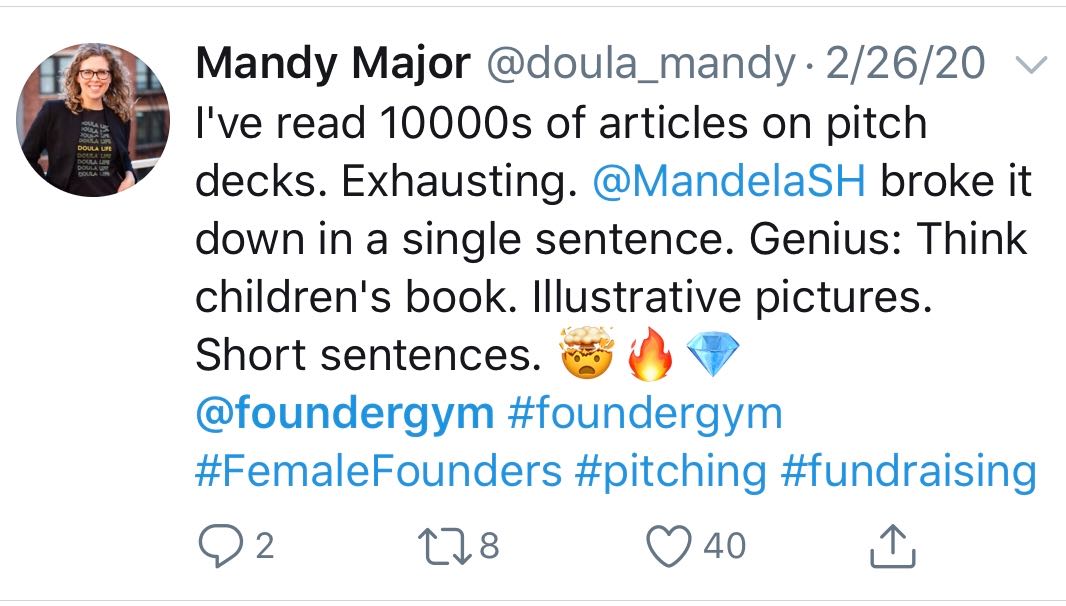 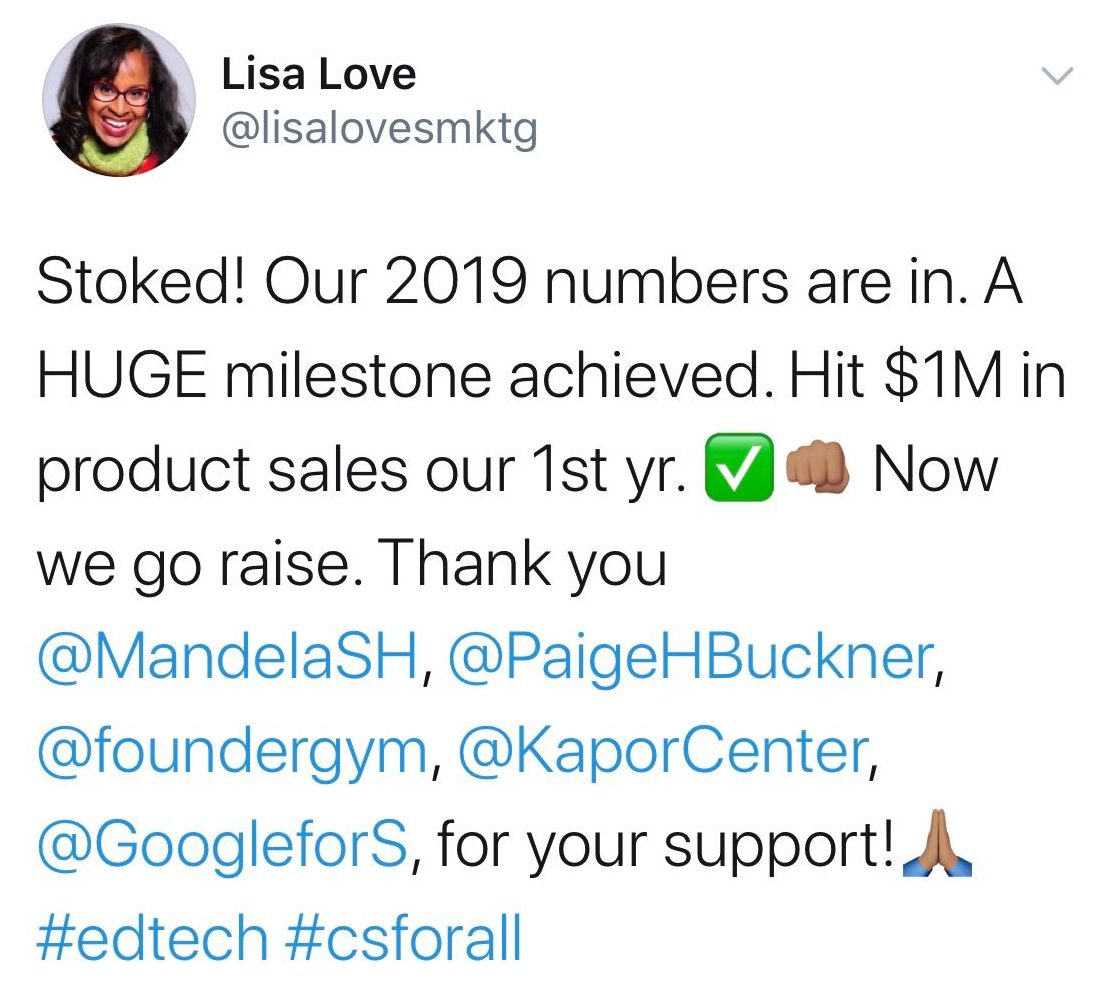 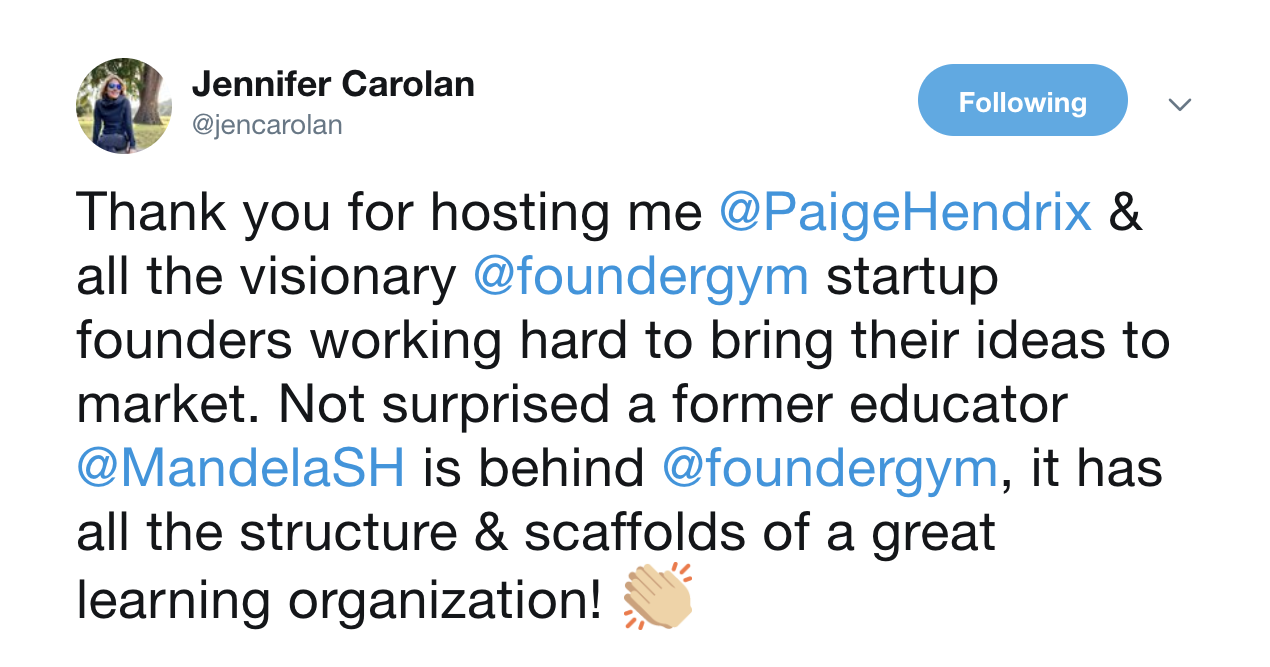 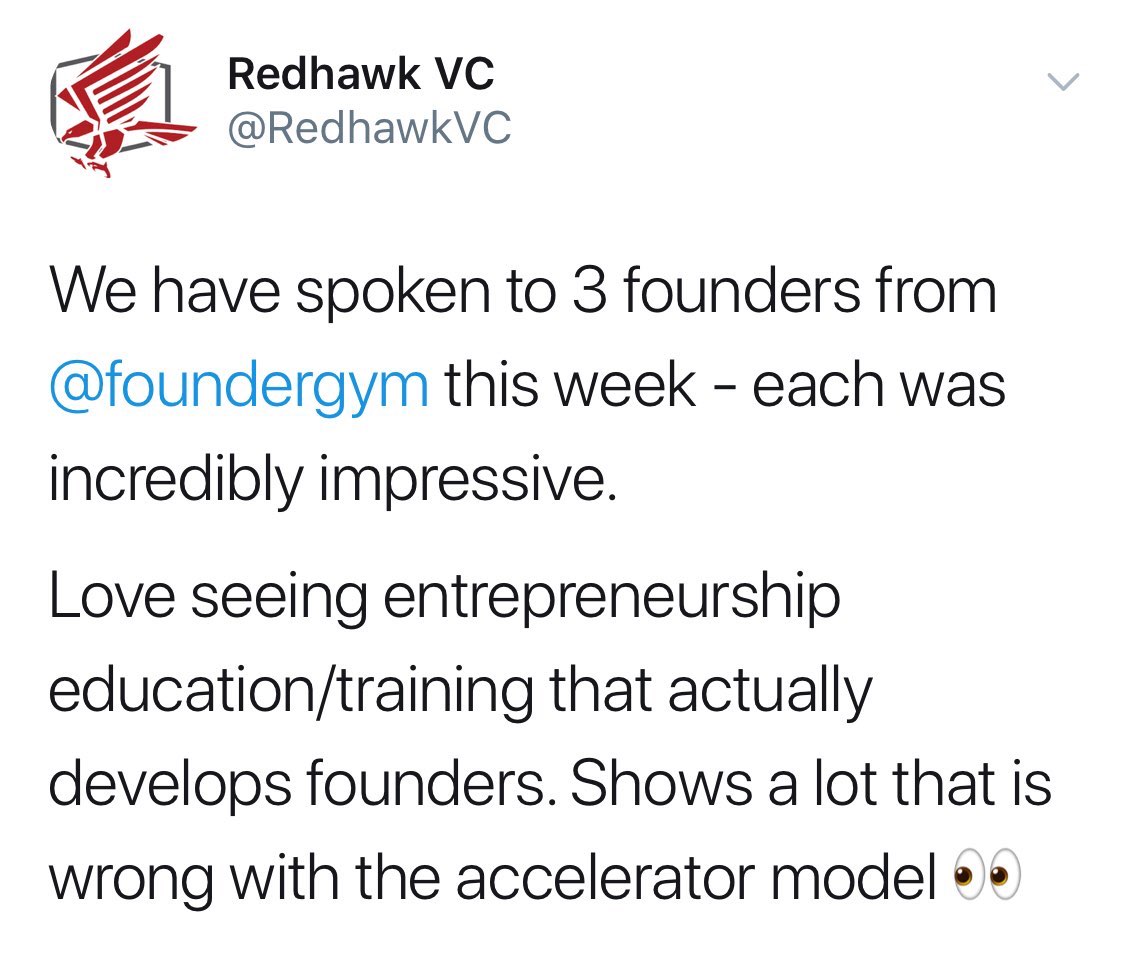 Founder Gym does not take equity in startups; we are an application and fee-based training program. Just like college, you must apply to be admitted, and if accepted, a tuition fee is required. The FG Fundraising Cohort is a professional development opportunity for tech startup founders who are ready to make an investment in their growth.

FG has trained 516 founders in 25 countries on 6 continents. Read the powerful stories of our founders and the way that Founder Gym helped them gain the confidence and knowledge to level up their fundraising and founder skills.

Apply to the FG Fundraising CohortFriday, May 7th

Set aside 30 minutes to complete the FG Fundraising Cohort application. Applications will be reviewed as they are submitted. The sooner you apply, the sooner you will be notified and be able to secure one of the limited spots in the cohort. Once the cohort reaches capacity, it will be closed, so take action quickly.

Read this article for tips on how to submit a great application.

Get Notified of Your StatusFriday, May 21st

The earlier you submit your application, the earlier you will be notified of your admittance status. All applicants will receive an email notifying them if they have been admitted in.

Once you receive the email notification that you are admitted into the FG Fundraising Cohort, you will have 72 hours (or 3 days) to accept the invitation and submit the $500 down payment for your tuition.

You will be onboarded into the cohort. The following day, you will attend the mandatory orientation, which is where you will meet your Gymmates, receive a detailed overview of the 6-week programming, and hear from invited FG Graduates who will share their best advice for what it takes to succeed in the FG Fundraising Cohort.

You did it! You completed one of the most intense founder training programs. Now it’s time to use your new knowledge, network, and know-how to take your startup to the next level.

Questions? Email us at [email protected]

Submit your information below, and you’ll receive an exclusive invitation to our next FG Master Class, which is 100% virtual and 100% free!